After 23 Years, Wilco’s Leader and Ceo, Doug Hoffman, Is Set to Retire and Leave a Legacy that Honors Core Values, Customers, and His Team. 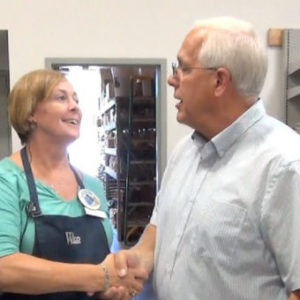 Long-time Wilco Cooperative CEO Douglas Hoffman has announced his retirement at the end of the year, leaving a legacy of wise leadership and strong personal ethics that have created a thriving business, and empowered corporate culture, and a team of dedicated employees.

Hoffman has led Wilco, a farmer-owned agricultural supply cooperative, for the past 23 years. During his tenure, he redirected and reinvigorated the organization to unprecedented financial success, which has directly benefited the cooperatives’ 3,000 member-owners.

Hoffman’s decisions in achieving this goal were not always popular: under his leadership, Wilco divested several business lines long deemed “sacred cows” – a tire sales business, a grass seed cleaning operation, and a chain of gas stations. Wilco members, and even some board members, initially resisted the change.

“Even when there’s emotional pressure, Doug is focused on making the right business decision, based on performance and potential,” says Sam Bugarsky, Wilco Chief Operating Officer who has been with the cooperative for more than 30 years. “The business lines we exited went back to our origin as a cooperative, but he recognized that there was no long-term profitability in them. He’s always been willing to make tough decisions that ultimately benefit Wilco and our members.”

Under Hoffman’s leadership, Wilco refocused resources on the cooperative’s retail store line, which at the time was not highly profitable but that Hoffman recognized had more long-term viability. Indeed, Wilco’s retail business has grown over the years and delivered strong returns to the business and its members, validating Hoffman’s strategic decision.

“Growing this side of our business meant investing millions of dollars, but it’s really separated us from our competition and now delivers a very robust earnings stream that has ultimately benefited our members,” says Randy Moore; Wilco Chief Financial Officer. “Doug led the board and our membership to understand the strategy, and the results speak for themselves. Because of this, there’s a lot of confidence in his leadership.”

Looking beyond operational decisions, Hoffman also spearheaded an internal initiative to establish a positive, proactive corporate value system that would deliver business returns as well as member loyalty, codified as CAP: Customer-focused, Accountability based, and Profit motivated. The core values created through the project remain the touchstones for Wilco Cooperative employees.

“The CAP initiative Doug led in 2003 really reinvented the organization with a more team and project-oriented management style founded in strong values that improved the culture and our strength as a business,” says Bugarsky. “To this day, he champions these values and screens decisions we make against them, which has led directly to the financial success we’ve enjoyed.”

Through his leadership approach of respect and responsibility, Hoffman has also built a team of highly dedicated staff who respect and admire him as a leader and an individual. He makes a point of visiting every Wilco location, including every retail store, and meeting with employees at least once a year, listening to their concerns. He leads the employee council he established, providing a forum for employees to voice opinions and ideas and that supplements the open communication he welcomes from all his staff. His monthly videos are watched and monthly newsletter articles are read by the team, who appreciate his direct and honest communication, as well as his responsiveness to individual outreach

“If he’s not on a plane, Doug responds immediately to every email and voice mail, regardless of who it’s from. He’s the most selfless person I’ve met in business, and certainly in the CEO role,” says Lisa Smith, Wilco’s Director of HR who worked for several Fortune 50 companies before joining the cooperative.

“Doug has made it a priority that our directors have the opportunity to receive an education that will help us lead Wilco to the benefit of our members,” says Glenn Goschie, who has served on the board for 11 years and was elected as chairman this year. “He also relates to our members directly, and has an open-door policy that welcomes their input, and they know from experience that if they identify a problem to him, he will ensure that it’s solved.”

Hoffman is recognized as a selfless and egalitarian leader, last in line at any company event, sacrificing his own company car during a cost-saving fleet reduction and still only driving his personal vehicle, and sharing the recognition for any achievements.

“He never makes our successes about himself. Instead, he gives the entire team credit for any accolades he or the company receives,” says Smith.

And those accolades are many: Wilco Cooperative has been named a Top Workplace in Oregon for each of the past six years; Hoffman has received the Top Leader award from The Oregonian two times and was recognized as the Agriculturist of the Year in 2013 by the Agri-Business Council of Oregon, and in 2017 received the Oregon Farm Bureau President’s Award.

A true “servant leader,” Hoffman’s personal philosophy is built on Wilco’s core values of integrity, excellence, respect, accountability, teamwork, and community. His unwavering commitment to living these values every day, and in every interaction, has generated deep loyalty and respect in turn, from employees and colleagues, from board directors and other leaders, and from Wilco members and customers.

“Doug is incredibly consistent in who he is and in his beliefs, which include an enduring faith in people,” says Moore. “He is a truly genuine, honorable man with an amazing depth of integrity, and he strives always to do the right thing.”

As Hoffman leaves Wilco, a beloved and successful leader by all accounts, one small piece of him will remain behind: by employee nomination and overwhelming vote, the main conference room in a recent office expansion was named the “Hoffman Room,” clear evidence of the strong impact Hoffman has had on his organization and its people.