The Young Retailer of the Year program, now in its 23rd year, identifies and promotes the next generation of aspiring independent home improvement retailers. It recognizes individual achievement by industry retailers age 35 and younger throughout the U.S. and Canada. Selected from three separate retail categories, honorees are chosen based on a number of criteria, including professional milestones, community engagement, continuing hardware industry education and extracurricular activities. 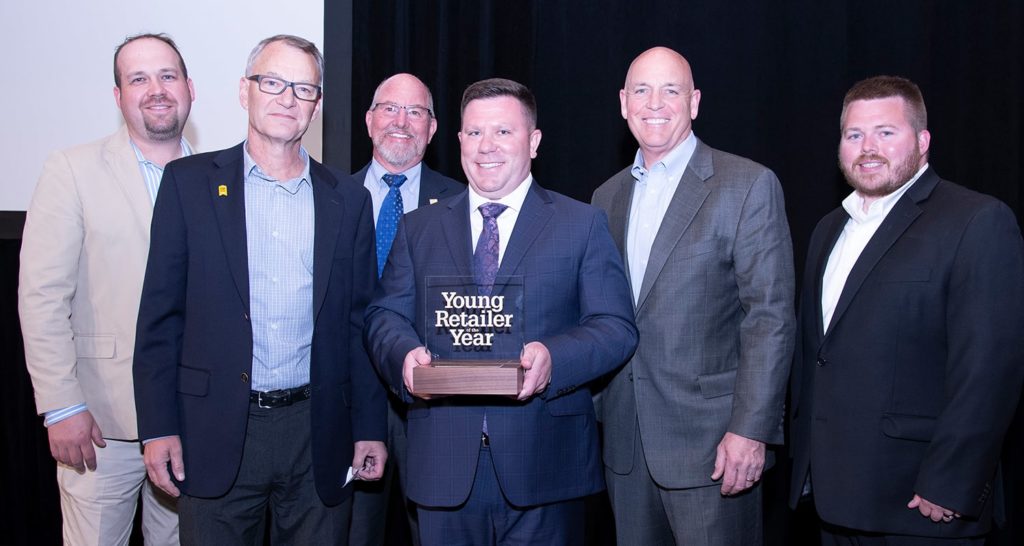 After TJ Colson started working at Wilco in 2003, it didn’t take long for management to realize the astounding talent in their young employee. He started as a part-time warehouse employee in Wilco’s Tangent, Oregon location. Five years later, at the age of 24, he had the opportunity to run that store, making him the company’s youngest store manager ever. By the end of the year, TJ had led the store to record sales. Just a few months later, he received a new challenge.

Wilco’s newly acquired store in Springfield, Oregon, wasn’t performing to expectations. It was also more than four times larger than the store in Tangent, with more than 40 employees. TJ was asked to take over management of the store and move sales in a positive direction. Determined to not just meet expectations, but exceed them, TJ started working alongside his team of employees to improve morale and confidence. He also became involved with the local 4-H, FFA, and Chamber of Commerce, to help restore the community’s confidence in the business. Before long, his hard work began to pay off with increased sales. In 2012, Springfield received the President’s Improvement Award, given to the location that has overcome the most adversity and made the necessary changes for long-term success.

With the Springfield location back on the path to growth, TJ next had the opportunity to open Wilco’s 15th location in TJ’s hometown of Corvallis. The new store started off strong. To this day, Corvallis is one of Wilco’s showplace locations, holding numerous sales and customer traffic records from its Grand Opening Sale and first year of sales.

In 2015, TJ had the opportunity to take on new responsibilities at Wilco. At 32 years old, he became the youngest district manager at the company, tasked with the oversight of eight stores. During that time, he opened Wilco’s 17th store in Salem, Oregon. Then, in 2017, TJ was selected for a newly created position—director of store operations. Since then, he and his team have opened Wilco stores in Bremerton, Washington, and Redmond, Oregon. These two stores are the first to showcase Wilco’s new decor package, which the company will begin to soon retrofit in other locations.

While TJ has been dedicated to growing Wilco’s sales and adding locations, he has been equally passionate about making sure his team of employees has the education they need to succeed. “I’m a big believer in training and supporting your employees. That’s how your business will reach a high level of performance and reach your potential,” he says. “I am here today because someone decided to invest in me. Investing in your employees builds their loyalty to your organization and they’ll want to give back. We’ve drastically cut our turnover rate because we’ve dedicated more of our resources to training.”

In the community, TJ enjoys working with youth and is heavily involved in 4-H and FFA programs. Using his skills in the livestock industry, he is a sought-after judge for livestock competitions. He and his wife Samantha are 4-H Cattle Club leaders and have helped many students raise cattle over the years. He has received four Outstanding Service Awards from the National FFA Organization and has spoken at several FFA State Conventions. Currently, he serves on the Board of Directors for the Oregon FFA Foundation. He’s also been instrumental in helping each organization raise funds through auctions. In other parts of the community, TJ has directed efforts to collect clothing items that are donated to the Portland Rescue Mission.

“To be selected as a Young Retailer of the Year is a high honor. Manufacturers, retailers, and wholesalers all anticipate the selection and celebration of the extraordinary accomplishments of the honorees,” Scott Wright, executive director of the Retail Leadership Institute, says. “TJ Colson shows the leadership and passion for serving the community that will move our industry forward.”

The 23rd Young Retailer of the Year awards banquet was held Monday, May 6, at the Renaissance Las Vegas Hotel prior to the opening of the National Hardware Show® and NRHA All-Industry Conference. For more information on the awards program, honorees and more, please visit nrha.org/yroty.

Founded in 1900 by a group of retailers, NRHA is a not-for-profit trade association whose mission is to help hardware stores, home center and lumberyards in the U.S. and Canada become better and more profitable retailers. Governed by a board of independent hardware retailers, NRHA fulfills its mission by providing information, communication, training programs and networking opportunities for the industry it serves. Each month, NRHA publishes Hardware Retailing magazine, which reaches approximately 35,000 home improvement industry professionals. NRHA also provides a wealth of online training and educational resources to thousands of retailers at nrha.org.